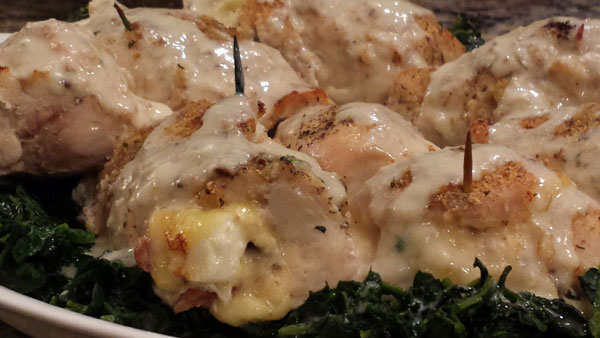 What exactly is Chicken Cordon Bleu?

Did you know that Cordon Bleu refers to a meat encased around or wrapped around a filling, such as meat and cheese, then breaded and either pan fried or even deep fried? Sounds simple, but not so simple. 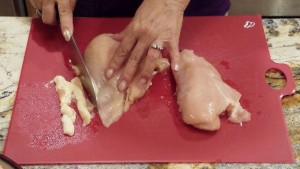 Where did the name Cordon Bleu come from? Cordon Bleu in French translation means “blue ribbon”, which originally was worn by the highest order of the Knighthood in the 1500’s, but hence forth, this terms refers to foods prepared to a very high standard and to award the exemplary chefs and cooks. Think of it as a cord of blue, a blue ribbon as prized awards given. 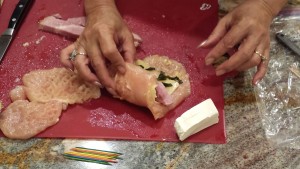 Cordon bleu can be made with veal, ham, chicken traditionally, however, you can make your own cordon bleu. Usually the veal, or chicken is pounded by a mallet to thin and widen, then a slice of ham and cheese is rolled inside-known as a roulade, a roll. Then it is breaded and fried or baked. With a ham cordon bleu it is stuffed with mushrooms and cheese. So as you see, it can have many variations in itself.

Now you are asking yourself, what type or kind of cheese? Usually, most people use Swiss with chicken cordon bleu, but it is up to you and your palate what you want. This is why this dish can be so much fun. You can be as creative as your palate wants to be. Yes, usually, the cordon bleu has a meat and cheese rolled up in it …call it a fancy pigs in a blanket, I’m joking. Seriously, can you think of other ideas, right off the bat? I sure can! But I digress. 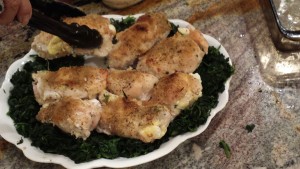 Chicken cordon bleu is a dish most everyone knows about or has heard of it, however, not necessarily eaten. Why you might ask? Perhaps they never went to a restaurant that served it, or didn’t know what it was, or afraid to make it at home. Don’t let the name ‘Chicken Cordon Bleu’ intimidate you! It is a fancy name, it is a fancy dish, but you can make it. 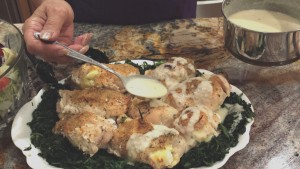 Okay, so now that you know basically it is a meat roll with cheese, it doesn’t seem so intimidating does it?

It is a matter of what is cooked, how it’s cooked and how it’s served. That is the final product… your masterpiece!