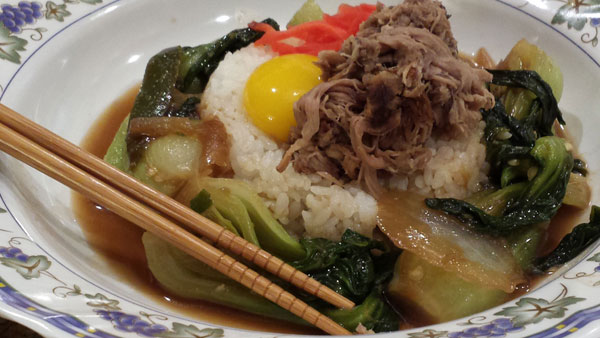 What is Korean Bibimbap? 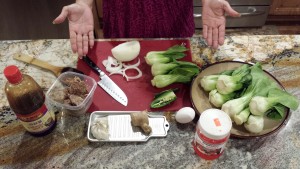 This is a very popular Korean dish and a signature dish in Korea. The word Bibimbap is translated to mixed rice. Not to be mistaken for fried rice. Bibimbap is similar to the Japanese dish called Chirashizushi. Bibimbap is a bowl of rice served with various vegetables, meats, fish and gochugang (Korean chili paste), soy sauce or doenjang (fermented soybean paste). Usually, beef is served on top with either a raw or cooked egg along with various namul vegetables. In Korea, ‘Namul” are seasoned and sauteed vegetables served as side dishes with rice. 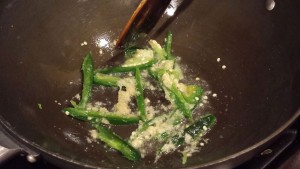 Similar to the Japanese Chirashizushi -rice bowl dish, the Koreans have different versions of the Bibimbap dishes too.

Hoedeopbap is a version of bibimbap, this utilizes a variety of raw seafood, similar to Chirashizushi, however, it only has ONE type of sushi (raw) fish in the bowl. You can order tune, salmon, squid, octopus or whatever seafood you want. The word “hoe” means raw fish. 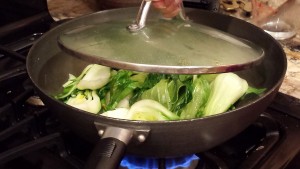 Yukhoe bibimbap is a Korean style steak tartare. It is raw fresh beef (filet mignon or a good lean cut of beef) and is usually seasoned and on top of rice, along with namul/vegetables. This is my favorite, next to Hoedeobap (raw fish).

Another variation is Dolsot Bibimbap, means stone pot. It is served in a very hot stone bowl with rice . 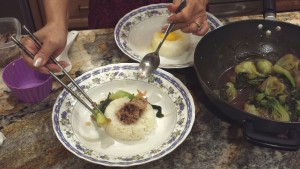 The bottom of the bowl is coated with sesame oil which crisps up the bottom of the rice that is placed in it. The bowl is so very hot it sizzles anything that goes in for a couple of minutes, mmm like fajitas, can you smell it yet? Usually a raw egg is placed against the side of the stone bowl and cooks the egg. The other vegetables (namul) is placed on top and round the rice. 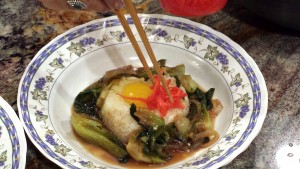 Any or all bibimbap can be served with gochugang (Korean chili paste), soy sauce or doenjang (fermented soybean paste) as a sauce for your bowl.

Most Koreans take the bowl and mix all together and eat.

Personally, I like to eat it as-is — separate in my bowl, having each and every bite a different taste, texture and flavor. You can drizzle a little shoyu sauce on top if you like.

jal meok-ge-sseum-ni-da is a Korean expression of thanks before a meal.